Competing in his first year in Men’s 1, Dane posted a huge score of 2 buoys at 41-feet off to win his first national title. His score would have taken third in Open Men, which Dane plans to ski in next year.

Team GOODE continues it’s hot streak as it took half of the slalom podiums at this week’s Mastercraft Pro Water Ski Shootout in Calgary, Canada.

GOODE’s Nick Parsons took third in Men’s slalom, finishing behind champion Nate Smith and Will Asher. Nick earned a spot in the final-three matchup by posting a great score of 3 buoys at 41-feet off, which was tied for that round’s highest score. The podium finish is his second in less than a year, after also finishing third at the Diablo Shores Pro Am last fall.

On the Women’s side, April Coble-Eller and Karen Truelove took second and third, respectively, while Whitney McClintock finished first. Heading into the final-three matchup, April was tied with Whitney for top score with 2 buoys at 39-1/2 feet off.

The great results for Team GOODE come days after it claimed three titles and numerous podiums at the Malibu Open, and comes in a season in which Thomas claimed both the Moomba and Masters titles, and Regina Jaquess (who did not compete at the Mastercraft Shootout) won the Masters and Malibu Open titles.

Fresh off offering water skiing’s first and only completely customized graphics, GOODE Skis is providing even more ways to customize your skiing with three new additions to the world-record breaking XT lineup: the Nano XTT™, Nano XTM™ and Nano XTW™.  Check out the entire XT lineup at store.goode.com.

The three new skis compliment GOODE’s flagship Nano OneXT™ by catering to skiers who prefer either narrower (traditional) or wider skis.  See which model is best for you with this ski comparison chart.

“The Nano OneXT has been one of the most well-received skis we’ve ever had,” said Dave Goode, founder and president of GOODE Skis. “But while the XT is going to be the right ski for probably 80 percent of skiers, there is still that 20 percent that likes the narrower or wider skis that we’ve been very successful with before. We are taking the best characteristics of the XT and adding them to these new widths so that no matter your preference, there is a world-class GOODE for you.”

The differences in the new skis are primarily the width, with the second “T” in XTT standing for “traditional” width (narrower than the XT), and the “M” and “W” in XTM and XTW standing for “mid” and “wide” (wider than the XT), respectively. While the new skis have a width and shape unique for each model, all feature the ground-breaking AsymRocker™, an asymmetrical rocker technology that first debuted with the Nano OneXT. AsymRocker creates a longer rocker on the offside, and a shorter rocker on the onside, completely eliminating any differences between on- and off-sides and leading to better, smoother and more consistent turns that build angle and add buoys.

The Nano XTT combines all the hard-charging, cross-course speed of the traditional-width 9900 series with the on-the-rails, no off-side-at-all turns pioneered by the Nano OneXT’s AsymRocker.

Designed with skiers who like to be more proactive in their turns in mind, many 36 mph skiers are going to find the Nano XTT more suitable to the sport’s top speed. Just ask Chris Parrish who is quickly returning to world-record form on his new Nano XTT.

The Nano XTM is the next generation of the ever popular Mid-Ride. The perfect combination of the performance-proven mid width and the XT’s rocker profile, the all-new Nano XTM is designed for skiers who like the ski to sit a little higher in the water, and the easier, more efficient ride that comes along with it.

If you liked the 9900 series mid rides and the Nano Twist, you’ll love the Nano XTM.

The Nano XTW takes all of the characteristics of the Nano XTM and makes them, well, bigger.

For skiers who like the ski to ride even higher on the water, the Nano XTW is a medium speed ski that creates monster angle off the buoys with minimal skier input. And the Nano XTW’s extra width makes it the easiest ski to get up on in the entire XT lineup, sparing your back and saving energy for where it really counts: in the course.

XT, XTT, XTM and XTW: What is the right ski for you?

Take a look at this handy ski model comparison chart to figure out which XT series ski is best for you. And don’t forget, you can make each model in the XT lineup look any way you want with GOODE’s 100-percent customizable graphics. Any design, any color. The only limit is your own imagination.

Regina defeated Whitney McClintock in the head-to-head finals to claim the Open Women’s slalom title for the third-consecutive year, while her fellow teammates April Coble-Eller (3rd) and Karen Truelove (4th) also skied well in advancing to the Final Four.

In Open Men’s slalom, Team GOODE’s Thomas Degasperi and Chris Parrish both advanced to the Final Four on the way to taking third and fourth, respectively. Nate Smith earned the title with K.C. Wilson having his best showing as a pro with a second-place finish.

Go to facebook.com/redbull and like the photo to show your support for Dorien and water skiing.

Dave, who won the Mexico stop in April, ran the 39-1/2 feet off pass all six times during the weekend. In the final round, he scored 4 buoys at 41-feet off, the tournament’s highest single score, to beat Harald Hintringer (0.5 buoys at 39-1/2 feet off).

While his skiing was exceptional, perhaps the most amazing part of Dave’s weekend was the ski he did it on. On Thursday, Dave designed his own custom graphics for a new Nano OneXT using the GOODE Online Designer Tool. The ski was built and shipped to him on Friday. He mounted it up and won with it a mere three days after ordering it. 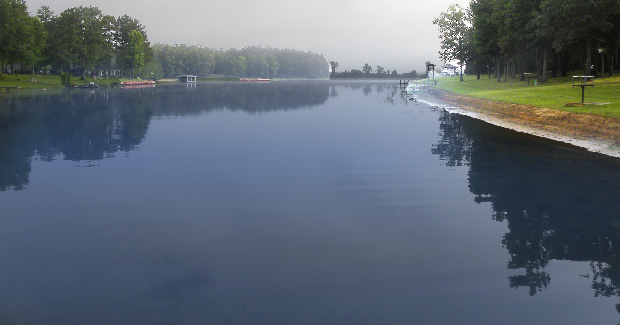 Expect big scores as a stacked field of skiers will hit the recently-becoming-legendary waters of Cedar Ridge Lakes as the second stop of the Nautique Big Dawg World Tour takes place this weekend in Canton, Miss.

The site of two of Regina Jaquess’ world records, including the pending one she set earlier this month, Cedar Ridge is gaining a reputation for huge scores. At the 2013 Big Dawg event held there, 39-1/2 feet off was ran 15 times by 13 different skiers.

Add a and some of the sport’s biggest 34 mph names, and you have plenty of reasons to following Saturday’s preliminary scores and Sunday’s brackets.

Team GOODE will be looking to add its second Big Dawg title of the year, as Dave Miller won the first stop in Mexico in April. More than half of this weekend’s field, including the top five seeds (Miller, Jay Leach, Chet Raley, Chad Scott and Tim Huston) are on GOODE.

The same company that revolutionized water skiing with the introduction of carbon fiber materials has once again changed the sport forever.

With its industry first, 100-percent custom designed skis, GOODE has now given you the ability to make your Nano OneXT look any way you want. Any design, any color. The only limit is your own imagination.

“It’s kinda crazy that in today’s day and age, in which nearly everyone has access to computer design programs and carries an 8-megapixel camera in our pockets, that we are still expected to have the same looking ski,” said Dave Goode, founder and president of GOODE Skis. “Not all skiers are the same, so why should we all have to ski on the same skis? We think people should be able to express themselves through their skis and we can’t wait to see all the creative designs people come up with.”

One person who has already taken advantage of the new capability is three-time world record holder Chris Parrish. He’s skiing on a custom design that honors his Native American Heritage.

“I can’t even explain how excited I am about how it turned out,” said Chris. “I grew up going to pow wows so the eagle on my ski has a lot of spiritual meaning to me. I’ve been getting a ton of compliments on it.”

There are two ways to make the world-record breaking Nano OneXT uniquely yours:

For a limited introductory time, GOODE is waiving the custom graphics charge, so get started on your personalized Nano OneXT today.

This weekend’s tournament at Cedar Ridge Lakes in Canton, Miss., was a record breaking one for Team GOODE as a world and four national records were set by GOODE skiers.

Chet Raley scored 4 buoys at 41-feet off to set a pending Men’s 5 U.S. National record. If approved, the record would best the existing one of 3 buoys at that line length co-held by Chet (2012) and fellow GOODE skier Tim Huston (2013).

Brooke Baldwin rounded 6 buoys at 38-feet off to set a pending Girls 2 national record. Her mark tops the current record of 5 at 38 set by GOODE skier Ruth McCreary in 2012.

And Cooper Tate’s annihilation of the Boys 1 record book continued this weekend as he set a new pending mark of 1 buoy at 38-feet off. Cooper entered the 2014 season focused on beating the national record of 3 buoys at 35-feet co-held by Brian Detrick (1999), Tyler Scott (2002) and Zane Nicholson (2004). In his first tournament of the year he broke it with 4 buoys at 35-feet off, and has preceded to up it a few more times with plenty of summer left to take it even further.

The North American ski season is starting to heat up and so are the scores of a number of Team GOODE skiers.

Dane Mechler and Giannina Bonneman both set PBs on their Nano OneXT’s at last weekend’s Florida Inboards Open at the Pickos Waterski and Wakeboard School.

Dane scored 2 buoys at 41 off to improve his PB by three-and-a-half buoys and post his first-ever score at that line length. The native Ohioan is a freshman member of the University of Louisiana Lafayette’s Rajun Cajun water ski team who turns 19 tomorrow.

And while they weren’t PBs, Team GOODE’s Thomas Degasperi and Freddie Winter got into the act with consistent skiing well into 41 off. T-Gas posted two scores of 3 buoys at 41 feet off at the Ski Fluid Classic last weekend in Polk City, Fla., while Freddie ran 3 buoys at 41 feet off in all three rounds of the Florida Inboard Open.

The great skiing is coming at the right time, as Freddie and Giannina both look to win this weekend’s Master Last Chance Qualifier at Sunset Lakes in Groveland, Fla., and join T-Gas at the 55th Masters on Memorial Day weekend.

Another Team GOODE member who looks to be peaking at the right time is Junior skier Eamon Van Der Merwe of South Africa, who ran 2 buoys at 39-1/2 feet off at the Ski Fluid Class as he preps for the Junior Masters.